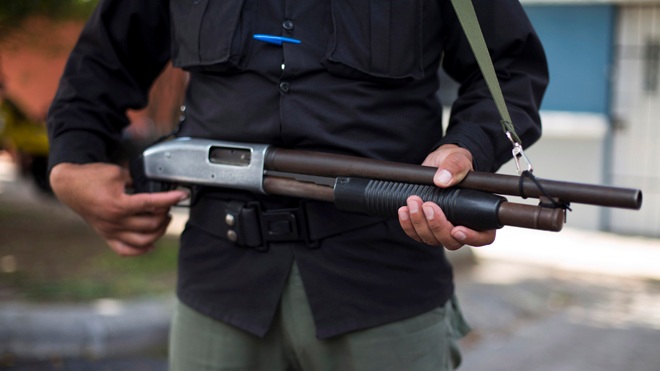 Distrust of police has made private security a big business in Latin America, where a majority of police forces are deemed incompetent or corrupt — or both. An army of nearly 4 million private security agents make up an industry growing 9 percent a year and projected to reach about $30 billion by 2016. That’s more than the economies of Paraguay or El Salvador. Across the region, private guards outnumber public officers beyond the global average of 2-to-1. In Brazil, it’s 4-to-1; in Guatemala, 5-to-1; and in Honduras, it’s close to 7-to-1.

“The private sector should be a complement (to the police),” said Boris Saavedra, a national security professor at the Center for Hemispheric Defense Studies in Washington. “But in some countries, they’re not the complement: They are the main actor.” While private security is growing worldwide, Latin America’s boom directly relates to rising rates of homicide, kidnapping and extortion. Plagued by drug cartels and violent gangs, Latin America has surpassed Africa to claim the world’s highest murder rate.

Private guards are part of everyday life in Latin American cities. With large guns and bullet-proof vests, they guard bakeries, even mattress deliveries, and ride shotgun in trucks carrying anything from Coca-Cola to cold cuts. They don earpieces and hide pistols under dark suits as they escort executives’ children to school.
But they’re not solving rampant crime. The guards-for-hire offer protection to the wealthy and middle-classes, leaving the poor majority to fend for themselves in a region already suffering from world’s worst income disparity. Poorer residents get by however they can: forming vigilante groups or paying thugs to leave them alone.

Drug gangs rule through fear, often employing local police to work for them. Police in southwestern Guerrero are accused of handing over 43 college students to a drug gang which, authorities say, killed them in September. Such crimes foster a state of fear. Insecurity is so pervasive that 13 percent of Latin Americans— or nearly 75 million people — feel the need to move to escape crime, according to the United Nations. Fear of gang violence is one of the main forces that has sent thousands of Central Americans, including unaccompanied children, toward the U.S. border.