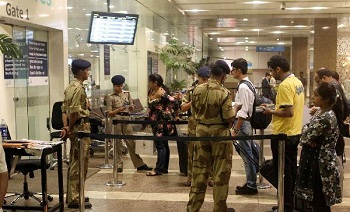 Jaipur Chief Secretary CS Rajan in a review meeting has directed the police department to draw an action plan for the security of the International Airport and state hangar. It was highlighted recently that high-rises in the nearby area are causing a security threat. After that Jaipur Development Authority put a cap on the construction of buildings beyond 15 metres and also sealed three buildings above that height. An official present at the meeting said, “Police has been asked to give suggestions on how high-rises should be constructed near the airport and state hangar. However, no decision was taken on the buildings which are already constructed as the matter is pending in the Supreme Court.”

Other than height restrictions, the Urban Development and Housing (UDH) department will also make separate bylaws for constructions in this zone.
The necessity to formulate the norms was felt after the District Collector wrote a letter to the JDA. “There is frequent VIP movement near the state hangar and it poses a security threat with high-rises constructed all around. At present, a developer can construct a building after procuring a no-objection certificate from the Airports Authority of India (AAI),” an official said.

Sources in the department said, “It would be difficult to raze the existing building constructions as owners had procured all necessary permissions. The bylaws will only restrict the construction of any further high-rise buildings in the area.” However, there are many new projects coming up near the airport periphery. Recently, AAI even provided clearance on raising the height of buildings at Bajri Mandi on Tonk Road to 33.5 metres from 3O metres. “But for those in close proximity to the airport and the state hangar, a developer can now only construct a building up to 15 metres in height. For anything beyond that, a special permission from the AAI would need to be sought,” said an official.