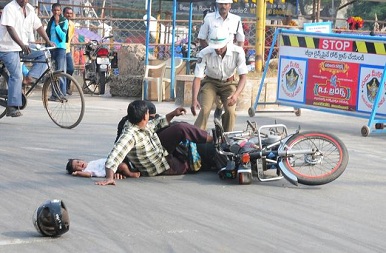 The Union home ministry has advised the states to ensure their police do not harass witnesses in accident cases in the name of investigation. A senior ministry official said the Centre was “seriously considering” passing a law on the subject, since advisories on state subjects are not binding on state governments. The advisory notes that most Indians avoid helping accident victims fearing the police would treat them as suspects rather than witnesses. This means that “most road accident victims die for lack of emergency medical aid”, senior Supreme Court lawyer Parmanand Katara said.

A Delhi-based NGO, SaveLIFE Foundation, says three in four Indians are deterred from helping accident victims for fear of being detained by hospitals till the police come, harassed by the police, and forced by the prosecution into unending court appearances. Last November, on a petition from the NGO, the Supreme Court had asked the Centre to issue an “executive order” directing the police, hospitals and legal entities not to harass people who help road accident victims. The advisory comes before the next hearing on May 15.

Asked about the possible contents of the proposed law, the ministry official cited a few while cautioning that nothing had been finalised and the matter was still at the stage of discussion among central ministries and NGOs:
•    Hospitals may be asked not to detain anyone bringing in a road accident victim;
•    The police will be told not to treat everyone who has noticed a victim and decided to help as a witness to the accident, let alone a suspect;
•    The police will at most take an affidavit from the Samaritans or witnesses at a place of their choice, and not necessarily summon them to the police station for grilling or force them to appear in court;
•    Violations will bring action against police officers and hospitals.