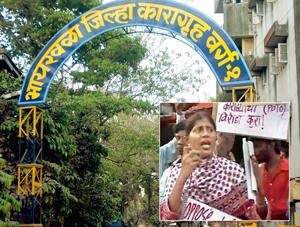 A move to install CCTV cameras inside the women’s barracks of Byculla jail in Maharashtra was scrapped after an inmate objected and resorted to a five-day hunger strike. While activists slammed the proposed move as a violation of human rights, the jail superintendent justified his action by claiming he had full right to decide where CCTV cameras should be installed. He also denied any inmate had undertaken a hunger strike.

Angela Harish Sontakke, 45, a political prisoner charged under the Unlawful Activities Prevention Act, was placed in an isolated cell after she protested against the installation of the cameras. Following this, she undertook the hunger strike.  According to Dr Anand Teltumde, General Secretary of the Committee for Protection of Democratic Rights (CPDR), “On April 1, some staff members from the male barracks came with cables and other equipment to the women’s barrack No 3, where Angela is lodged. On inquiring, she learnt that CCTV cameras were being installed in the barrack.”

Teltumde said, “After Angela and some other inmates protested that this would be a clear violation of their privacy, the jail superintendent visited her barrack twice, in the evening and the next morning, but refused to withdraw the plan.” Teltumde further revealed that when Angela protested, the jail superintendent blamed her for instigating other inmates and put her in an isolated cell on the evening of April 2. It was then that Angela undertook the hunger strike and informed the Chief Medical Officer about it. On April 5, she also submitted a letter to a prison officer, alerting him to the fact that she was on a hunger strike. She demanded that she should be sent back to her barrack, and the plan to install CCTV cameras in the barrack should be scrapped. The CCTV plan was finally shelved on April 7 and Angela called off her strike immediately.