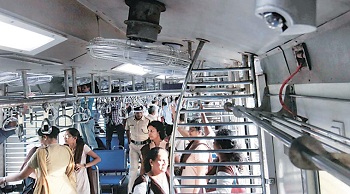 Central Railway has sought private participation in installation of CCTV cameras in ladies coaches in its suburban trains. In lieu of CCTVs, companies will be given advertising rights in the interior as well on exteriors of the coaches for a period of two years. CR’s general manager S K Sood said, “There are 140 rakes on CR—Main, Harbour and Transharbour—and each rake has five ladies compartments. CR has decided against using its own funds to execute this project as each camera costs Rs 6.5 lakh. CR will require more than 500 cameras and rolling out from its own budgetary funds will take several years,” said Sood.

Each coach will require two to five cameras with digital video recorder and other accessories so that recordings of the past 30 days are available. The cameras should facilitate facial recognition in low light conditions too. They should also withstand shock and vibrations as trains clock 80-100kmph on the suburban section.
Sood said that on expiry of the two-year contract, the firm will be allowed to continue for three more years if it sets up control rooms to watch live feed using 4G technology. The decision to install CCTV cameras was taken to deter criminals from entering compartments to rob or molest commuters after several such incidents were reported. Metro and Mono too have CCTVs fitted in all compartments. Also, CCTV cameras have been installed in 2,800 BEST buses.