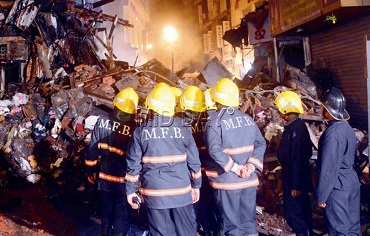 The Mumbai Fire Brigade, which lost two of its brave-hearts to the Kalbadevi inferno recently, falls short of meeting the standards set by the Central government for all fire brigades in the country. According to the Standing Fire Advisory Council (SFAC) set up under the Ministry of Home Affairs (MHA) in 1955, the response time for fire-related emergencies should be three minutes in all high-hazard and closely built areas, and not more than five minutes in other areas. Since Kalbadevi qualifies as the former, the fire brigade technically should have reached the area within three minutes. However, the officials who came from the Byculla fire station took 13 minutes to reach the spot.

In fact, in congested areas in the city — with traffic, hawkers, illegal parking, double-parking, speed breakers, signals and a large number of pedestrians jaywalking — the average response time of the Mumbai Fire Brigade has been between 10-20 minutes, depending on the location. The guidelines also require that the city have 44 fire stations instead of the existing 33; in addition, it needs at least 130 pumping units (including fire engines and water tankers) instead of the existing 88.

The SFAC is India’s apex body, which governs matters related to fire safety. Its guidelines, known as ‘compendium of recommendations’ is the benchmark supposed to be followed by every fire-fighting agency. Although it is not mandatory, it is the minimum requirement supposed to be met by the district authorities. According to the guidelines, every city with a population of more than one million must have one fire station for every 10.36 sq km. Thus, if Mumbai’s area is 437 sq km (as per the BMC), the city should have a minimum of 43 fire stations as against the existing 33. Mumbai has 33 fire stations including the city as well as suburbs, with two headquarters — one at Wadala and the other at Marol.

The SFAC, a Central government body, meets every year and consists of the Director General of National Disaster Response Force & Civil Defence (NDRF&CD), the Fire Adviser and Deputy Fire Adviser to the MHA, Directors General, Chief Fire Officers or Deputy Fire Officers of various states and representatives of various other central bodies. Its previous meeting was held in November 2014 in Goa.