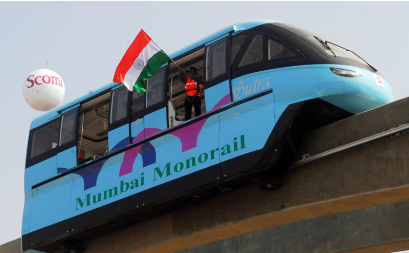 Apart from around 500 armed personnel and private guards manning the seven stations, the authorities have chalked out several measures to ensure safety for monorail commuters. Invisible policing inside trains and real-time checks would keep trouble-makers, bag-lifters and molesters at bay hope officials.

At present, every station has metal-frame detectors as well as personnel manning the premises with hand-held detectors and soon, X-ray machines to check bags will also be installed. Bomb detection and disposal squad and a dog squad are also deployed.

“Every coach has two CCTV cameras recording the movement of passengers, the images of which can be viewed at the end of the day. But soon, we will have a system through which officers at our control rooms can keep an eye on commuters during the journey,” an official said. For that, sensors will be installed along the tracks that will capture the CCTV images and relay them live to the control room at the nearest station. “If there is any suspicious activity, the control room will send a wireless message to the security,” an official said. Pointing out that the CCTV cover will ensure safety for women, additional metropolitan commissioner Ashwini Bhide said, “Maharashtra Security Force personnel and private guards are manning every entry and exit points.”

To tackle rowdy gangs, guards in mufti will travel on trains. “If they find a trouble-maker, the plain-clothes personnel will hand him over to the MSF guard. MSF guards on platforms will also keep commuters away from doors that will have to shut as a train pulls out,” he said.