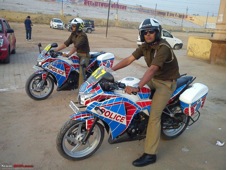 The Uttar Pradesh government will equip the police in Noida and Greater Noida with sophisticated weapons, new patrol cars, communication gadgets, a well-equipped forensic laboratory and surveillance cameras to help them fight crime and mafia better. The state government has been facing flak for the rampant illegal sand mining as well as rising crime in the NCR areas in Gautam Budh Nagar district and Ghaziabad.

Industrial Development Commissioner Alok Ranjan held a meeting of the Noida authority and state police officers on Wednesday to discuss the plan to strengthen the police in the NCR areas. The home department officers were told to get the plan rolling after getting the nod from the state cabinet. Noida CEO Rama Raman was also present in the meeting. IG (Law and Order) RK Vishwakarma said 150 high mast lights, 600 CCTV cameras, hydraulic platforms, heavy-duty cranes, anti-riot equipment, traffic command center, forensic laboratory, mobile forensic laboratory, water cannon and vajra vehicles will form the new police inventory. Apart from this, modern housing facilities will be provided to the Noida police personnel.

A modern control room would be set up with 75 cars and 75 motorcycles. There would be additional 75 patrol cars and 75 motorbikes for quick response. Each patrol car would be equipped with GPS. Not only the criminals but those who break the traffic rules would be dealt with strictly. An e-challan system would be launched, said Vishwakarma. Five new police stations would be set up in Noida phase- III, Knowledge Park, Eco Tech I, Eco Tech II and the Yamuna expressway area. The 12 police stations located in the rural areas of Gautam Budh Nagar would be modernised.