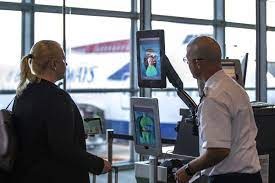 Soon tens of thousands of travellers who are not U.S. citizens departing from Philadelphia International Airport (PHL) will peer look into a camera that will instantly scan their face, check if it matches the picture from their passport or visa, then permanently store it — a biometric technology that has already left privacy advocates queasy.

Airport and U.S. Customs and Border Protection (CBP) officials said this week that some scanners using facial biometrics are installed and operating at the airport, with 25 boarding gates in all used for international flights soon to be ready for use. That will bring the airport toward compliance with a Congressional mandate in the wake of Sept. 11, 2001, to biometrically record all foreign nationals entering and exiting the U.S. (Canadian citizens are excluded).

Biometric screening is already mandatory for travellers who are not U.S. citizens — known as foreign nationals — entering the U.S. in a process U.S. Customs and Border Protection (CPB) calls “simplified arrival.”

” U.S. citizens can voluntarily participate in the process, but are not required,” Heather Redfern, a spokeswoman for PHL said of the exit screening. The scanned photos of U.S. citizens would be deleted within 12 hours.

However, the facial recognition scans of non- U.S. citizens will be stored in a database. Travellers who do not have a U.S. passport can now opt out by notifying a Customs and Border Protection officer or airline or airport representative. Their documents will be checked manually. But eventually, it’s expected that passing through biometrics will be mandatory.

This change has the potential to impact many travellers considering that about 2.5 million passengers passed through PHL from January through October 2022, according to the most recent data available. About 1.24 million were travelling to another country, but those numbers include U.S. citizens, so a firm figure on how many will be affected was unavailable.

“The safety and security of our passengers and airport employees are our top priority and require a collaborative effort by the City of Philadelphia Department of Aviation, the U.S. Department of Homeland Security, and our airline partners,” PHL Chief Operating Officer Keith Brune said in a statement on the announcement.

He said the system, “will make the screening process more efficient for everyone and is especially important as international travel continues to grow post-pandemic.”

Stephen Sapp, a spokesman for CPB, said the technology is already in use for travellers who are not U.S. citizens exiting 33 U.S. airports. It is also in use at border crossings and seaports. In all, he said, more than 252 million travellers have already been through facial biometrics.

Sapp said the biometrics, as of now, are part of a pilot program with airports and airlines for travellers who are not U.S. citizens leaving the country. The CPB still needs to write a regulation that would make biometrics mandatory and usher it through the approval process. There is no firm date when that might happen.

And, for at least the near future, biometrics remain optional for U.S. citizens.
Joseph Martella, CBP’s Area Port Director for the Area Port of Philadelphia, said “facial biometrics prevented more than 1,650 impostors from illegally entering the country.”
Officials at PHL began experimenting with face scanning in 2020 for gates international gates A15, A16, and A17 to determine which of several types of technology worked best.
As a result, face scanning is already underway in Philadelphia at 10 gates, A7 through A17. The biometric technology will be installed at 10 more gates from mid-January through February. Scanners will be installed at the remaining five gates in late March through mid-April.