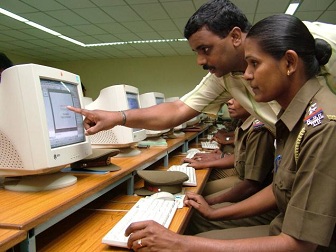 The Andhra Pradesh government has urged the Centre to immediately release Rs.7,454 crore for modernisation of the police force in the State. Deputy Chief Minister N. Chinna Rajappa met Union Home Minister Rajnath Singh in Delhi and submitted a memorandum to this effect. Among others, he sought the finances for creating special anti-naxal forces, imparting training to police and creating new offices. He also wanted the funds for setting up a Marine Academy at Machilipatnam, Marine Police Station in West Godavari District, a marine battalion and for setting up outposts.

Mr. Rajappa took up with Mr Singh the repatriation to the State of five senior police officers, who were serving on deputation at the Centre. The Deputy CM met Union Urban Development Minister M. Venkaiah Naidu and sought Rs. 400 crore for urban water supply and drainage schemes in East Godavari district. During his meeting with Union Agriculture Minister Radha Mohan Singh, he reminded him that the State had already sought Rs.1,924 crore towards compensation for losses suffered by farmers in 7.04 lakh hectares during drought last year. He also met Union Minister for Environment and Forests, Prakash Javadekar, and requested for allocation of 2,700 acres for the Police Department in Guntur division.