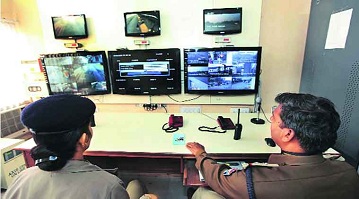 The Supreme Court has directed the Delhi Police to install CCTV cameras in all police stations in the national capital in two months. Concerned over the behaviour of policemen towards complainants, especially women, a bench of Chief Justice H L Dattu and Justice S A Bobde said that the Delhi Police Commissioner will ensure that CCTV cameras are installed at conspicuous places in all police stations in Delhi within the stipulated time. The court said the report to be filed by the Police Commissioner should also mention details of cameras already installed and how many of them are functional.

“Let them (police) file an affidavit and tell us if they have installed CCTV cameras. And if they have done so, how many of them are actually functional. The report by the commissioner shall contain this information clearly,” the bench said and fixed the matter for hearing on May 11. The order came in the wake of an incident wherein a woman lawyer from the apex court was allegedly manhandled by some policemen and others inside a police station in Delhi in April last year. Based on a letter from another woman advocate, Mahalakshmi Pavani, the court had taken suo motu cognizance of the incident and sought explanation from theDelhi Police.

It had also appointed senior advocate Vijay Hansaria as amicus in the case and asked him to give suggestions in the matter. Senior advocate Sidharth Luthra appeared for the Delhi Police and accepted most of the suggestions by the amicus, following which the bench handed over the investigation of the matter to the Special Cell of the Delhi Police. The court asked the Special Cell to register an FIR in the matter and investigate all people, including policemen, allegedly involved in the incident.

The investigation shall be conducted by an officer not below the rank of the Deputy Commissioner of Police and a report will be submitted to the court by the next date of hearing. The bench, however, turned down a suggestion by Hansaria to transfer the police personnel, accused of assault by the woman lawyer, to another police station pending the probe.