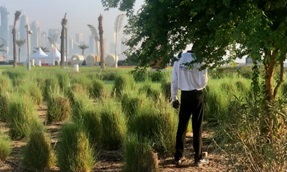 Migrant workers employed as security guards in a huge park that will be at the heart of Qatar’s World Cup festivities appear to be being paid as little as 35 pence an hour. The men are stationed across Al Bidda Park, a pristine green space adjoining the Fifa Fan Festival. Throughout the tournament Al Bidda Park will be packed with football fans enjoying the sweeping lawns, shaded picnic spots and views over Doha. The guards interviewed are not contracted to Fifa or deployed in the Festival.

But long after fans have retreated to their hotels, the guards will stay on. In fact, it appears that fans are likely to see more of Doha in a week than these men will see in years. The guards say they work 12-hour shifts, and claim they usually get just one day off a month.

“We just go between our duty and our accommodation,” said one holding out his phone. “You can show me anywhere in Qatar and I won’t know where it is.”

The claims come on the eve of the start of the men’s Fifa World Cup, amid widespread international criticism of the host nation’s record on migrant worker and LGBTQ+ rights.
In recent weeks Fifa and the Qatari authorities have battled to turn the spotlight away from workers’ and LGBTQ+ rights, with Fifa’s general secretary Gianni Infantino saying World Cup teams they should “focus on the football” and warning them against “handing out moral lessons to the rest of the world”.

The Guardian’s findings are based on interviews carried out over the past few months with park guards working for Al Nasr Star Security Services. Guards and “marshals” employed by other companies also work in the park. There is no suggestion they are subject to the same claims over conditions.

Analysis by The Guardian of workers’ pay notifications, corroborated by workers’ accounts of their working hours and pay, suggests that the guards are typically paid 1330 rials (£310) a month for 348 hours on duty, plus a small food allowance. It is understood that this includes 104 hours of overtime, for which they are paid 150 rials, which if correct equates to less than 35p an hour. Such working hours and overtime pay appear to be in breach of Qatar’s labour laws.