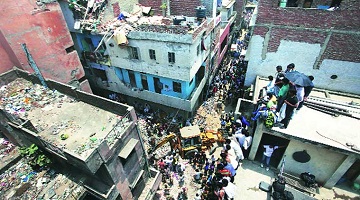 While all of Delhi is vulnerable to earthquakes, a risk and vulnerability assessment carried out by the Delhi government shows that 10 out of city’s 11 revenue districts are vulnerable to fires and nine are prone to building collapses. The analysis is part of the Draft Disaster Management Plan for Delhi 2014-15 prepared by the Revenue department. “Vulnerability is thus the liability of a community to suffer stress or the consequence of the failure of any protective devices and may be defined as the degree to which a system or part of a system may react adversely to the occurrence of a hazardous event,” the plan states.

The draft plan, submitted to the LG-led Delhi Disaster Management Authority, also gives an account of Delhi’s disabled population under the head “societal vulnerability”. It states: “Persons with disabilities are not a heterogeneous group… and will have needs in a disaster or emergency situation.” Citing the 2011 Census, the draft plan gives an account of the 2.94 lakh disabled people in the capital. Underscoring the hindrances in reaching services to the disabled population, the plan lists 15 types of “possible disabilities that may arise from any disaster leading to major chaos”.

They include development disabilities, psychological, respiratory, spinal cord, physical or instinctual disabilities, loss or amputation, risk of development of new disabilities, among others. The hindrances in delivering services to the disabled in the event of a disaster, as mentioned in the plan, include health and education disarrangement, resource scarcity, inaccessible to relief even if evacuated from a disaster area and “discrimination by other survivals in temporary shelters”. “As per the disability population data of NCT of Delhi, preparation and response actions and strategies are to be incorporated and arranged in all the 11 districts of Delhi and also included in each district disaster management plan,” the draft plan states.