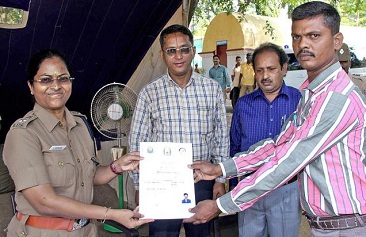 A total of 92 unemployed youth, including women, who underwent three-week long private security training, were selected by private concerns at a job fair organised by the Salem District Police at the Armed Reserve Police ground in the city recently.
The Tamil Nadu Skill Development Corporation launched the programme of imparting specialised skill-based training for the unemployed youth through the Salem District Police. Legal and self defence training formed part of the programme. At the end of the training programme, a job fair was conducted in which various private concerns, security agencies, leading textile houses, hotels, educational institutions participated.

Mettur Chemplast recruited as many 27 persons, while G4S recruited 21, Force One Security Agency 12, and a leading textile shop and two leading hotels recruited 32 persons together. An additional seven trainees were selected for jobs, but they decided to pursue higher studies. G. Subbulakshmi, Superintendent of Police, who was the chief guest at the valediction of the training programme, handed over the offer letters to all the selected candidates.

The Salem District Police has planned to conduct similar training programmes for which 75 unemployed youths have already registered their names, police sources said.