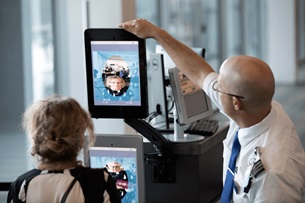 The Transportation Security Administration (TSA) is now exploring the potential of facial recognition technology by introducing kiosks with cameras at 16 major airports to conduct facial identification.

It has been integrated at major domestic airports from Atlanta, Boston, and Denver to Detroit, Los Angeles, and Miami—the pilot program began at Reagan Washington National Airport (DCA) in 2020. However, facial recognition has been banned by some cities, including San Francisco. The TSA has plans for expanding use of the technology across the U.S. by this year.

The system works like this: Passengers insert their ID into a machine at the kiosk and look at a camera for a few seconds. The technology compares the individual’s face with the photo on their ID. A human agent is present to provide final confirmation, although these machines will eventually operate completely autonomously.

Since early 2022, the TSA has been utilising the Credential Authentication Technology 2 (CAT-2) system at checkpoints to verify the identity of individuals at the airport. “TSA will convert the information into an anonymized format, encrypt it, and transfer it for temporary analysis to the Department of Homeland Security (DHS) Science & Technology Directorate (S&T), which will assess the effectiveness of this technology at the checkpoint,” states the TSA’s website.

According to Geoffrey Fowler of “The Washington Post,” it has not yet been determined whether the technology is capable of detecting impostors and conducting security inspections more efficiently. He mentioned in a recent interview with PBS that there are also concerns about unfair treatment of minorities. “Are people with darker skin going to be sent to special lines for extra inspection?” Fowler wonders.

It sounds as though those travelling over the holidays do have the option to opt out of the process. While it could help passengers to get through airport security more quickly, many may be concerned about the security of the data collected. The fine print states that data could be retained in the system for up to two years. “Legislators have to get involved to decide what technology can be trusted,” says Fowler.

The Washington Post columnist authored an article in early December on this topic. Nobody yet understands the civil rights ramifications of facial recognition technology, he noted. Fowler spoke with Jason Lim of the TSA, who referred to the technology as a security enhancement. “We are so far very satisfied with the performance of the machine’s ability to conduct facial recognition accurately,” Lim said.

He added that passengers need not be concerned about incorrect identification or about unfair treatment, saying, “We work diligently to ensure the technology is performing according to the highest scientific standards. Demographic equitability is a serious issue for us, and it represents a significant element in our testing.”

According to an opinion article by Blank Rome LLP, facial recognition technology means that airline staff no longer need to spend time checking passengers’ IDs. The staff “are better able to give their attention to passengers who need it, like the elderly or those with disabilities and other special needs,” the article explained. Early findings also showed that the technology is quite accurate even while passengers are wearing face masks.