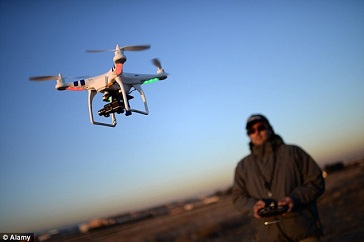 Burglars are buying drones to beat sophisticated intruder systems at expensive properties in Britain and the US, it has been revealed. Gangs can buy the gadgets for as little as £30 and send them over electric gates and fences to take a closer look at their targets – filming the layout of estates and zooming in on alarm system wiring.
A drone was allegedly used to identify a property for a burglary in Suffolk, with the county’s police force revealing it has investigated 16 varied incidents involving the mini-helicopters in 18 months.

Drones are also posing problems across the Atlantic, with police in the US warning of the so-called ‘Tub Gang’ who are using them in New York and New Jersey to identify burglary targets. Digital footage on one drone recovered by police included stills of homes, a cinema and an arena – while the gang are also believed to have struck in Pennsylvania, Illinois, Minnesota and Missouri.

Last year it was claimed that Britain’s nuclear power stations were under threat from attacks by drones, after a spate of mysterious and illegal flights over various power stations in France. Drones can include cameras and are usually used for recreational purposes – but increasingly they are being considered for commercial uses, such as carrying deliveries and monitoring crops. Last August, US Senator Charles Schumer described New York City as being ‘the wild, wild west for commercial and hobby drones’, adding that ‘more and more’ were being used for illegal acts.

A Suffolk Constabulary spokesman said: ‘In the UK, the use of drones is covered by legislation within the Air Navigation Order 2009. ‘Responsibility for investigation and enforcement of breaches of that legislation rests with the CAA, assisted where appropriate by local police forces.’ And a Civil Aviation Authority spokesman warned: ‘Drones are subject to aviation rules and regulations and anyone breaching those rules can be prosecuted.’