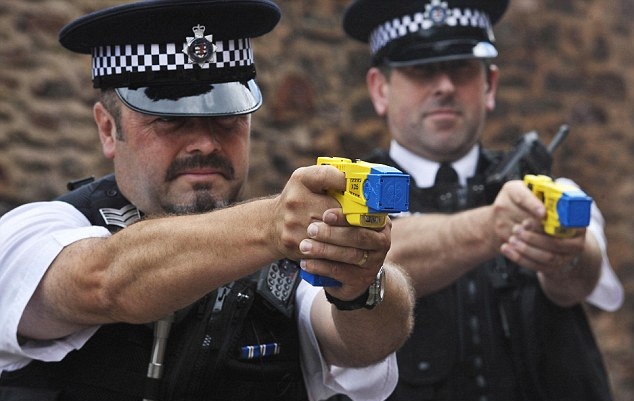 Every frontline police officer should be offered a Taser to help fight the threat from lone-wolf terrorists, a police leader has declared. Steve White, who chairs the Police Federation, said evidence of plans to murder officers made the move necessary.

‘The terrorist ideal to get attention no longer relies on an attack being in a place of note,’ he said.  ‘It could be in Cheam high street, in any town, in any part of the UK. We know there are more dangerous people out there, preparing to attack police officers and we need to be able to respond to that threat.’

The terrorist threat level for police was raised to severe two weeks ago in the wake of the Paris atrocity and a foiled assault on officers in Belgium. Since then, police chiefs and junior officers have been considering how to counter the extra dangers.
Last December, a threat was made to kidnap and kill a policeman in the West Midlands. Officers were given extra security briefings and urged not to travel to work in uniform. Leaders of the Police Federation, which represents rank-and-file officers, will vote next month on a proposal that every uniformed frontline officer should be offered training in the use of Tasers, though some may choose not to carry them.
The weapons, which carry an electric current of up to 50,000 volts to incapacitate dangerous suspects, have been linked to at least ten deaths in England and Wales over the past decade.