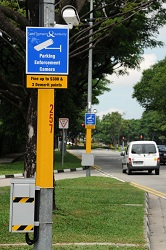 The Land Transport Authority of Singapore has announced that it will expand the coverage of CCTV cameras to 40 more locations around Singapore. LTA added that this is due to the “positive results” seen in the earlier implementation of the CCTVs at the 30 locations, which include Beach Road, Bishan, Pasir Panjang Road and River Valley Road. Fewer cases of road obstruction have been observed since cameras were installed in April last year, LTA said. LTA also said it will also call a tender to install and operate CCTVs at 60 additional locations. When completed in mid-2017, CCTVs will be used to enforce against illegal parking at a total of 130 locations island-wide, it added. To identify a CCTV monitoring zone, LTA has painted lamp posts or sign posts within CCTV monitoring zones with an orange vertical strip.