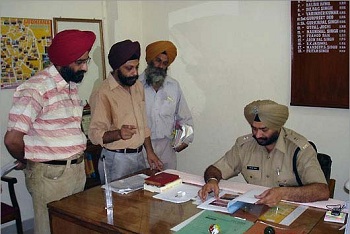 Sangrur police has won an award under the category, ‘Excellence in Public-Private Partnership in Public Safety and Security.’ Former Senior Superintendent of Police, MS Sidhu, will receive the award, instituted by Security Watch India (SWI), on behalf of the District Police from Union Minister of State for Home Affairs, Kiren Rijiju. MS Sidhu had started the ‘Surveillance System for Safe Society’ (S4) in March 2013, when he got installed about 2,963 CCTV cameras in the whole of the district. Sidhu said, “The total cost of the project was nearly Rs 22 lakh. The cameras were installed without any government funding. Even the maintenance cost was not borne by any government agency.”

Out of total of 2,963 CCTV cameras, 97 are installed in Amargargh sub-division, 243 in Malerkotla, 633 in Dhuri, 1,155 in Sangrur, 259 in Sunam, 278 in Dirba and 298 in Moonak sub-division. Most of the cameras are installed on main roads and near or around police posts and stations. But at some places police roped in commercial establishments like petrol pumps. “These cameras are regularly checked to ensure there is no mal-functioning,” Sidhu added.

The initiative, he continued, was taken by the police under private-public partnership and was financially backed by different NGOs, unions and social organisations. The police only played the role of a motivator and provided technical assistance. “These cameras have helped the police to crack three important cases in the district. It is a story of CCTV cameras recording and cops catching criminals,” he added.