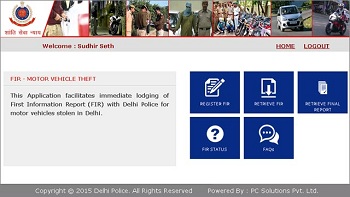 Delhi Police have launched their first e-police station to deal exclusively with cases of motor vehicle theft. The pilot project of the “Motor Vehicle Theft (MVT) Application” is now accessible on mobiles and computers. The soft launch is only for police stations in South Delhi and will be extended across the city after sorting out technical glitches. The formal inauguration of the e-police station and the MVT App will be done by Prime Minister Narendra Modi, after which the e-police station and MVT app will be made available for public use, a senior crime branch officer said.

The app will enable the complainant to register a First Information Report (FIR) online and instantly receive a copy of the same without going to the police station.
The app will also provide an “untraced report” of the stolen vehicle to the complainant within 21 to 30 days of the FIR, helping the complainant seek an insurance claim.

“Electronic matching of stolen and unclaimed vehicles from the centralised databases and timely disposal of vehicle theft cases to reduce pendency at police stations and courts, are among other features which this app will provide to its users,” the officer said. The MVT app will ensure electronic transmission of digitally signed FIR to the complainant as well as the area SHO, designated Court, insurance company (if available). It will automatically send mobile text messages or emails to the police control room (PCR), all SHOs in Delhi police, district DCPs, state transport authority, all senior superintendents of police (SSPs) across the country, states crime records bureau (SCRB) and national crime records bureau (NCRB) simultaneously.