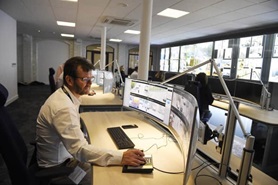 A new CCTV network which has been rolled out across Edinburgh in Scotland will help manage the Capital’s Hogmanay celebrations and deter anti-social behaviour like the firework-throwing on Bonfire Night and the arson attack on the city’s war memorial, the council has claimed.

The council says the access to real-time data and advanced analytics will drastically improve its response to emergencies and the management of large-scale events like the Festivals and Hogmanay. Council leader Cammy Day officially opened the new operations centre, which will also use technology to help improve traffic flow, transport infrastructure and city planning. The authority says it will position Edinburgh as a leader in the UK for smart security and surveillance tools.

The project has been delivered in partnership with IT service and solutions provider North as part of a £2.6m contract, part funded by the European Regional Development Fund. Cllr Day said: “This new operations centre has been years in the making and it’s fantastic to see it live in action. With cutting-edge low-carbon technology designed to keep the city moving and our communities safe, it drastically steps up our capabilities as a council. We’ve completely overhauled the technology we use within the control centre and across the city, replacing outdated analogue cameras with intelligent internet-enabled devices. This means we can analyse events and traffic in real time. Particularly as our city grows, our investment will support the safety of the public and wider community, deterring and preventing anti-social behaviour and crime like we sadly experienced recently on Bonfire Night and Remembrance Sunday.

“Edinburgh is fast becoming an example of a truly smart city and it’s thanks to trailblazing projects like this. We’re also rolling out waste and housing sensors, innovative digital learning opportunities in schools, while exploring an urban traffic management control system which is a tool for monitoring traffic flow. The whole operation is much more sustainable and data driven which, crucially, is going to lead to more efficient council services for the people of Edinburgh.”

Scott McEwan, acting CEO at North, said the council was taking transformational steps to becoming a smart city and praised its “forward-thinking approach”. He said: “We are really excited for the local authority to see the seismic impact introducing smart technologies has on the quality of the environment, and importantly, on the health and wellbeing of people who live in and visit Edinburgh.”

As part of its project delivery, North recruited an Edinburgh-based modern apprentice and an apprentice to assist the roll-out of the CCTV network and the provided curriculum support activities to local schools and community volunteers.