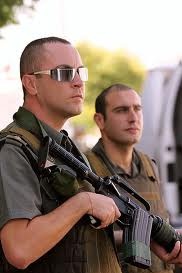 At a recent training session, private security contractors from the Israeli firm Tactical Zone carried out a simulation that involved guarding a client who was under attack. In the wake of recent extremist attacks in Europe, the scenario, as one security industry expert predicts, may play out more frequently in the future.

He has teams who have served in undercover and elite military units, former military personnel with active-duty and real-time combat experience. Trained to survey and assess sites, they are adept at early threat detection and know how to act quickly and effectively if an institution comes under attack. Industry experts say the threat of urban terror is new to Europe, but not Israel, which is why demand has grown by some 30 percent since January’s attacks in France.