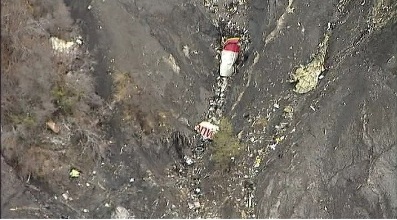 The pilot of the crashed Germanwings flight 4U 9525 was locked out of the cockpit, according to French authorities, raising questions about the wisdom of the current system of cockpit door locks. Germanwings flight 4U 9525 was an Airbus A320. It crashed in the French Alps on Tuesday after descending at a steady rate from its cruising altitude until it crashed into a mountainside at an altitude of 6000ft. French authorities say the co-pilot, 28-year-old Andreas Lubitz, was left in control of the plane while the pilot stepped out of the cockpit.

The authorities say that the blackbox voice recorder demonstrates that the pilot tried in vain to get back into the cockpit, even resorting to a doomed attempt to break down the reinforced door. Reinforced cockpit doors with sophisticated locking systems were introduced by the Federal Aviation Administration (FAA) in America shortly after the 9/11 attacks in 2001, to prevent a repeat of the scenario on which hijackers invaded the flight decks and took control of four planes.

However, even at the time there was concern that the locks could prevent access to the flight deck in an emergency, so failsafe measures were added. In the case of the Airbus 320, a member of crew could gain access to the flight deck by entering a security code. This initiates a 30-second countdown during which time the pilot can override the emergency access request and deny access.

The thinking behind this is that if the pilot in the flight deck is incapacitated, other crew members would be able to gain access in an emergency to revive them or take control of the plane. However, hijackers with inside knowledge of the code would not be able to gain access if the pilot was conscious and aware of the danger of admitting them to the cockpit. However, the logic of this system breaks down in a scenario in which a pilot on the flight deck, taking advantage of the brief departure of his colleague who has gone to the toilet, decides to deliberately crash the plane.
In this situation, the emergency override system would be useless. The cockpit doors, designed to withstand sustained attack from the outside by small arms fire and even grenades, would be impossible to open.

Following the disappearance of Malaysia Airways flight MH370 last year, there was speculation that the pilot or co-pilot could have deliberately diverted the plane and crashed it in the southern Indian Ocean.