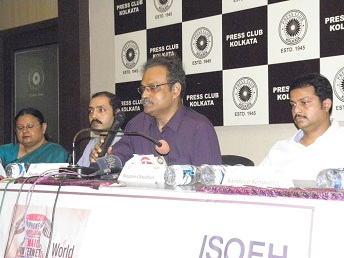 With increased cases of hacking and cyber crime, Public Relations Society of India, Kolkata and Indian School of Ethical Hacking organised an IT security awareness programme at the Kolkata Press Club. Based on the rising need and demand for cyber security, PRSI launched their Guide Book on Cyber Security along with Indian School of Ethical Hacking. PRSI Chairman, Kolkata, Soumyajit Mahapatra said that the growth of cyber crime has created the necessity to enhance more consciousness. The book is going to serve that purpose.

The speakers said that there is a need to protect mobile phones with passwords, which is not practiced by 64% of Indians as per survey. As per NASSCOM survey, India needs 500,000 IT security professionals in the next 5 years while the current number is only 37000 working in the industry. The IT revolution has led to a growth in the number of netizens, and misuse of technology in cyberspace is increasing both at the domestic and international levels. The speakers said that the IT Security industry is extending high end cyber security solutions to government and corporates as well as to the academia who have got hacked or may face the threat of being hacked.

The speakers said that through emails and even from social networking sites phishing attacks can take place. Attackers get into your network by sending an email attachment. For all these a strong password and a good firewall are essential to keep you safe from online attacks.