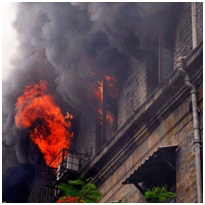 According to the fire department, if buildings fail to comply with the notice in the stipulated period, they will be declared as “unsafe buildings”. Electric and water supply will be disconnected and legal action would be initiated, it added. Furthermore, concerned persons would be liable for a punishment of up to three years of rigorous imprisonment or a fine of Rs 50,000, the fire department said.

The notices have been issued to buildings which are in deviation from, or are in contravention, of the requirements with regards to fire prevention and safety measures. These buildings are found to be non-compliant of the standards and rules laid down by Maharashtra Fire Prevention and Life Safety Measures Act 2006. The notices come in the wake of a number of outbreaks of fire that have taken place in India’s financial capital, one of the major ones being the blaze that broke out at two pubs in the Kamala Mills compound in December last year. A total of 14 people lost their lives while several others were injured in the blaze.