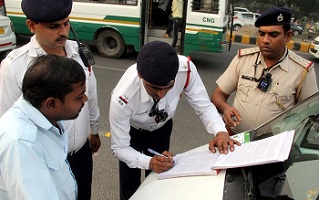 Anti-social elements caught on infamous MG Road will no longer be able to be accuse police of high handedness or wrongfully catching them as the men in uniform have been given body-worn cameras to record what’s going on. After traffic police successfully used the cameras, two city police stations were given a camera each to use while patrolling the mile-long stretch of the road, popularly known Mall Mile that has 33 pubs and bars.

“Two cameras have been given to Sector 29 police station and to DLF Phase-2 police station. MG Road is largely covered by these police stations and the patrolling teams will soon start using the devices to catch violators” said Assistant Commissioner of Police (Traffic) Mamta Kharab.

The stretch is notorious as a hub for criminals and predators after sunset. Rowdy scenes and skirmishes between policemen and drunkards are common at the busy commercial hub especially after 11 pm. Violators will be under the watch of cameras attached to policemen’s uniforms, and the recordings will be used against unruly elements. Kharab said cameras given to traffic personnel were delivering good results, and violators behave properly with the cops. “We often monitor footage from the cameras and they are used regularly by traffic police at main junctions” she said.

Traffic police was given 15 cameras on November 6 last year for better functioning and monitoring of traffic related issues. The two-inch front-facing rotatable cameras with wide-view lens, imported from United Kingdom, are attached to the policeman’s uniform and capture video and audio. A screen allows the user to playback videos to show the violators and it is not possible to delete or overwrite footage or distribute videos in the camera as the device is encrypted, said Kharab. Weighing less than 150 grams, the cameras are equipped to record full HD video for up to 10 hours. Video and audio recordings have date and time stamp, tamper proof digital fingerprint and encryption facility.