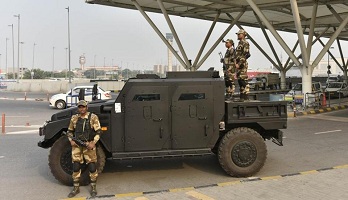 If a proposal of the Central Industrial Security Force gets the nod, the Delhi Airport may soon get a fleet of bulletproof vehicles as part of the Quick Reaction Team (QRT) to minimise the damage in case of an attack. The Central Industrial Security Force (CISF), which provides security to 59 of the 98 operational airports in the country, has asked for bulletproof vehicles at Delhi and other sensitive airports, said a CISF official. The CISF recently deployed Sherpa, an armoured vehicle that can withstand 10kg of explosives and numerous bullets, on trial basis, but wants a smaller vehicle for the QRT fleet.

“In case of an attack, we need to respond swiftly to minimise the damage. A bulletproof vehicle will help us in neutralising the suspect without exposing our personnel to the possible threat. We need such vehicles for round-the-clock patrolling. Right now we have Gypsy, which is open and the commandos cannot hide behind anything and fire,” CISF’s Additional Director General for Airports MA Ganapathy said.

The CISF has already forwarded the proposal to the Bureau for Civil Aviation Security (BCAS), which has written to the Airports Authority of India and private airport operators.
If the proposal gets cleared, Delhi may become the first airport in India to get these vehicles. Mumbai, Chennai, Ahmedabad and other sensitive airports will also get them in the coming days.

According to sources, nearly 15 vehicles, part of QRTs and the patrol squad, are not fast enough to chase a threat. The CISF has Scorpio, Bolero apart from Gypsy for patrolling and sedans are used by senior officials for travel. Scorpio is mostly used by QRT commandos.
Though the maintenance is done regularly, the CISF official said it will not survive for long in case of a terror attack. “In case of a 26/11 type attack or an attack where a terrorist is inside a vehicle, you need a vehicle which can withstand even bombing. Delhi is the most sensitive airport of the country and you need sophisticated weapons and vehicles for it,” said a CISF official, requesting anonymity. There are over 4,500 CISF personnel for the security of Delhi airport, who are deployed at all terminals — T1, T2 and T3. “QRT is the most important part of airport security and we have almost a dozen vehicles which are part of our QRT. These vehicles patrol outside and inside the airport and also around the periphery, which is 43km long. Being the most sensitive installation of the country, we cannot travel on vehicles that are in bad condition,” the official added