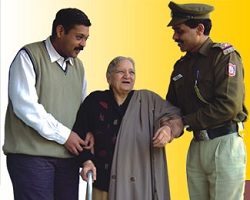 Delhi has been categorised for the second consecutive year as the most unsafe city for senior citizens in 2015, the latest data from “Crime in India” report released by the National Crime Records Bureau (NCRB) said. With a rate of 108.8 crimes per 100,000 elderly population, senior citizens in the national capital are almost five times more likely to become victims of a crime than in the rest of the country. The national rate for such crimes stands at 20.
This category is followed by Madhya Pradesh 60.5 (3,456 cases), Chhattisgarh 53.7 (1,077 cases) and Andhra Pradesh 51.6 (2,495 cases).

Asked about the increasing crime rate in the city against senior citizens, Special Commissioner of Police (Crime) Taj Hassan said: “We have been running a campaign since 2014 that every case should be registered. The major jump in crime rate was seen in 2014 and after that in 2015. So, we want that every crime should be detected and correct registration should take place.”

The officer said that the Delhi Police is very serious about the security of senior citizens regarding which a senior citizens’ security cell was formed on June 20, 2004, at the Police Headquarters level and now in all 11 districts of Delhi.