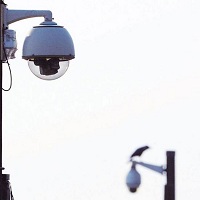 Delhi Police had launched a Rs 73 crore project in 2013 to put the entire national capital under Closed Circuit Television surveillance after the home ministry asked the police to use 1,888 surplus CCTVs from the Commonwealth Games (CWC) 2010. Five years later, and after spending Rs 43 crore, the police have failed to set up their own surveillance network even in the central district which houses the high security Parliament House, Central Vista and government offices. Just in the central district, the police spent close to Rs 7 crore in the past few years in hiring 145 CCTV cameras, outsourcing the work to a private agency.

“Had the installation of CCTV cameras been completed timely, the monthly recurring expenditure of Rs 21 lakh on hiring these cameras could have been avoided. The total payment against this ongoing hiring arrangement up to September 2017 alone was Rs 6.75 crore,” the Comptroller and Auditor General (CAG) observed in a report tabled in Parliament on Thursday.

The CAG, in its audit report on the home ministry, said Delhi Police had awarded a contract to Electronics Corporation of India Limited (ECIL) in 2013 for Rs 73.29 crore for “supply, installation, and commissioning of CCTV system in the high security areas under the jurisdiction of six police stations of New Delhi and Central district”. The first phase involved use of 1,211 CWG cameras and equipment valued at Rs 14.81 crore. A deadline was fixed to complete the work within 150 days of “receipt of road cutting permission from civic agencies” for the respective sites. The project, however, remained incomplete as of October 2017 despite an expenditure of Rs 42.94 crore, the CAG noted.

The audit pointed out lapses on part of the MHA as it observed that the ECIL had completed civil and related work and the sites were ready for installation of security equipment by October 15, 2013. The MHA on its part kept revising the scheduled completion date and Delhi Police blamed the delay to non-receipt of CCTV cameras and other items for three years between July 2012 and June 2015. “The CWG items were in the possession of the Sports Authority of India, Delhi University and Jamia Millia Islamia University and were to be book transferred from the ministry of youth affairs and sports to Delhi Police,” the auditor said on the reasons for delay in executing the project.