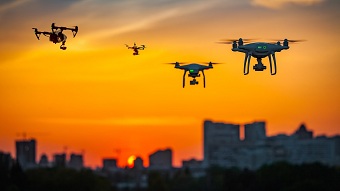 The Directorate General of Civil Aviation (DGCA) has issued the finalised guidelines for commercial use of drones, or remotely operated aircraft, in a move that will allow private operators across sectors such as agriculture, health and disaster relief and sectors such as photography, security, surveillance, etc. However, the regulator clearly disallowed delivery of payload by drones for now, which means they cannot be used by e-commerce companies or online food platforms for delivery of food or goods.

As per the regulations, to be effective from December 1, all civilian drone operations will be restricted only during day time and flying will be restricted within visual line of sight which usually would be 450 metres. Except nano drones and those owned by National Technical Research Organisation and central intelligence agencies, the rest would be registered and issued Unique Identification Number.

The norms prevent drones from flying around certain restricted locations such as airports, near international border, near coast line, state secretariat complexes. Further, they cannot operate in strategic locations, vital and military installations and Vijay Chowk in the capital.
Unveiling the regulations, Minister of Civil Aviation, Suresh Prabhu noted that the relief efforts in Kerala would have been much more effective had the regulation been in place by now. “We are likely to go from travelling in auto rickshaws to air rickshaws. There is a wide range of application of drones, from disaster relief, surveillance, security monitoring, precision agriculture, precision logistics,” said Minister of State for Civil Aviation, Jayant Sinha.

However, the guidelines in the current form prohibit flying of drones that are not in the operator’s visual line of sight that restrict various applications such as carriage of goods or passengers. The government has identified 23 sites across the country where the drone technology will be put to extensive use to evaluate its further usage. A drone task force has been formed under Sinha’s chairmanship that will provide draft recommendations for drone regulations for the future.

The registration of the drones, and permission to fly will be done digitally through the ‘digital sky platform’, connected to local police, which will implement “no permission, no take off”. The DGCA in its guidelines has also detailed the requirements that manufacturers need to equip the drones with, without which the regulator will not clear the aircraft for flying. These are inclusion of the “no permission, no take off” feature and a facility to take over a rogue drone