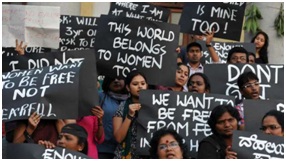 India is the world’s most dangerous country for women due to the high risk of sexual violence and being forced into slave labour, according to a poll of global experts released recently. War-torn Afghanistan and Syria ranked second and third in the Thomson Reuters Foundation survey of about 550 experts on women’s issues, followed by Somalia and Saudi Arabia.

The only Western nation in the top 10 was the United States, which ranked joint third when respondents were asked where women were most at risk of sexual violence, harassment and being coerced into sex. The poll was a repeat of a survey in 2011 that experts saw Afghanistan, Democratic Republic of Congo, Pakistan, India, and Somalia as the most dangerous countries for women.

Experts said India moving to the top of poll showed not enough was being done to tackle the danger women faced, more than five years after the rape and murder of a student on a bus in Delhi made violence against women a national priority. “India has shown utter disregard and disrespect for women … rape, marital rapes, sexual assault and harassment, female infanticide has gone unabated,” said Manjunath Gangadhara, an official at the Karnataka state government.

“The (world’s) fastest growing economy and leader in space and technology is shamed for violence committed against women.” Government data shows reported cases of crime against women rose by 83 percent between 2007 and 2016, when there were four cases of rape reported every hour. The survey asked respondents which five of the 193 United Nations member states they thought were most dangerous for women and which country was worst in terms of healthcare, economic resources, cultural or traditional practices, sexual violence and harassment, non-sexual violence and human trafficking.

Respondents also ranked India the most dangerous country for women in terms of human trafficking, including sex slavery and domestic servitude, and for customary practices such as forced marriage, stoning and female infanticide. India’s Ministry of Women and Child Development declined to comment on the survey results.