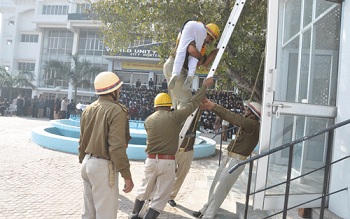 Increased awareness among people in Bengaluru about fire safety norms has brought alive an old rule which existed in the Fire Force Act but had been given a go by all these years. The Karnataka fire and safety emergency services department has made it mandatory for residents of high rise buildings to undergo training in dealing with fire breakout on their premises, using equipment and evacuation techniques.  As per the rule, 40 per cent of the occupants/residents should undergo this fire safety drill held by the department, failing which occupancy certificate for the high rise would be withdrawn.

The vertically growing city did not bother much about fire safety guidelines till it was hit by one of the worst fire tragedies — the 2010 February, Carlton Tower inferno that claimed nine lives and left over 50 injured. Investigation revealed that the commercial building had flouted major fire safety norms and did not have firefighting equipment in place. The tragedy also woke up the authorities from their slumber, who then took up inspection of high rise structures, issued notices for violations and kept NOCs on hold till they complied. However, fire safety issue remains a grey area.

Though the Fire Force Act mandates compulsory training to occupants of high rises, the rule was almost forgotten. A few months back, the government redefined the term by amending the zoning regulations of BDA — height of a high rise building was reduced from 24m to 15m which translates to ground plus four floors. BDA’s Master Plan 2015, brought out in 2007, had identified a building as a high rise if it scaled 24m and above. This had not gone down well with BBMP and fire force department. However, after correspondence with BDA stating that as per National Building Code, a high rise is defined at 15 meters and above, the government brought it down by 9m from 24m.