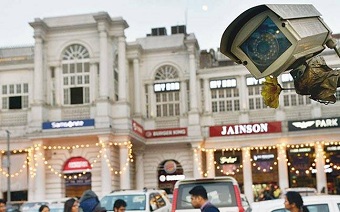 The Delhi Police will be the custodian of all CCTV cameras in public spaces in the capital, including ones to be installed under AAP government’s CCTV project, a committee formed by L-G Anil Baijal has recommended. If notified, Delhi will become the first city with a set of rules governing CCTVs in public spaces. The committee and its recommendations are likely to deepen the confrontation between Baijal and Chief Minister Arvind Kejriwal.

The ‘Delhi Rules for Regulation of CCTV Camera Systems in NCT of Delhi, 2018’, drafted by a committee chaired by Principal Secretary (Home) Manoj Parida, was submitted to Baijal recently. The rules are proposed to be issued after getting feedback from stakeholders and people under the Delhi Police Act, 1978.

Kejriwal, who had dubbed the panel “illegal”, directed Parida, also the PWD Secretary, to place the proposal on installation of 1.4 lakh CCTVs in Delhi in the next Cabinet meeting. Earlier, PWD Minister Satyendar Jain had asked Parida not to chair the L-G’s panel.

Kejriwal and AAP MLAs had even staged a dharna outside Raj Niwas demanding the panel be disbanded. As per data collated from multiple authorities, Delhi already has at least 2.5 lakh CCTVs in public spaces. In its eight-page rules, the panel, which had representatives from Delhi Police and IT Ministry, recommended that the “appropriate authority” on installation, operation and monitoring of CCTVs will be the Deputy Commissioner of Police (Licensing), while warning that any violation will invite “punitive action”.

Formed on May 8, the panel was tasked with framing SOPs and regulatory framework related to installation, operation, monitoring and other issues concerning CCTVs in public places. Observing that there was a need to strike a balance between security and right to privacy, right to life and property through regulation of CCTVs, the report states that owners and handlers of CCTV systems monitoring a public place — including housing societies, marketplaces, government departments — will report to the DCP (Licensing).

The “purpose, number, location of the CCTV system and such other details, including the manner of usage, handling and storage of data or information through the system” will have to be disclosed to the police in a detailed form, which is also part of the rules. “Information collected… shall be used only for specified purpose, as declared to appropriate authority (DCP Licensing), with a legitimate aim and necessary to meet an identified need. Data controller shall ensure information is not misused in any manner,” state the rules. On the retention of CCTV footage, owners will have to inform police how long they plan to store the data, the rules state, adding that no information shall be disclosed to any person not authorised in this regard