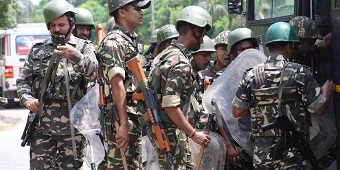 State and Central authorities are planning to introduce a psychometric test in the recruitment process of the country’s police and paramilitary forces, Union Home Ministry officials said. The proposal was discussed recently in a meeting attended by representatives of Central Armed Police Forces (CAPF), police forces of several states, the Bureau of Police Research & Development (BPR&D) and Home ministry officials.

According to the Union Home ministry, nearly 700 personnel of the paramilitary forces have committed suicide in the last six years. The number is roughly the same in state police personnel across the country. Last month, a personal security officer of a judge, who was a head constable with the Haryana police, shot and killed the judge’s wife and son for reasons that have not become clear so far.

By subjecting aspirants to the test, experts are hoping they would be able to ascertain mental capacity, behavioural patterns and hidden personality traits. Currently, only the Special Protection Group (SPG) conducts the test before inducting personnel. The SPG provides security to the top echelon of the country’s leadership and other designated members.

A senior Home Ministry official said the proposal is based on the assessment that the traditional methods of recruitment, which lean more towards testing physical capability, are unable to meet the demands of forces. “The job requires physical fitness, mental toughness and working in isolated and stressful conditions. If the person does not have the aptitude, these conditions can severely affect his/her mental balance and that, in turn, can have dangerous ramifications…” the official explained. Sources said that the principle governing these tests makes it possible to quantify one’s personality by asking questions about emotions, thoughts and behaviour in situations at and outside work. In India, only a few private companies are using the test.