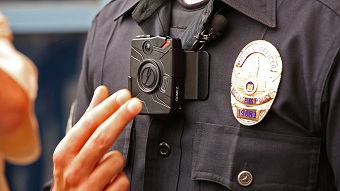 All police in Delaware will now have to wear body cameras. Gov. John Carney has signed the bill lawmakers passed in late June, largely thanks to police support. The new law requires all officers to wear the cameras, along with a few related employees, such as Department of Correction probation officers and special investigators in the Department of Services for Children, Youth and Their Families.

Just before signing the bill in the conference room of the Delaware State Police Troop 2 building on Pulaski Highway in Glasgow, Carney promised the law would improve trust between law enforcement and their communities, particularly communities of color. “I know that’ll make a difference,” he said.

Carney also said he was reminded of the press conference he held in the same room after the 2017 deaths of Delaware State Police Cpl. Stephen J. Ballard, who was killed in the parking lot of a Wawa in Bear, and Lt. Steven Floyd, a correctional officer killed during the violent uprising at James T. Vaughn Correctional Center near Smyrna.

“I get this terrible feeling in the pit of my stomach when I come into this room because of the memories it brings back,” Carney said. “This, today, will help me get over that.” Carney was flanked by Black Caucus lawmakers, police representatives and other officials such as Department of Safety and Homeland Security Secretary Nathaniel McQueen and Attorney General Kathy Jennings, who also spoke in support of body cameras.

“I don’t want officers having stories being told about them that aren’t true,” said Rep. Sherry Dorsey Walker, a Democrat from Wilmington who spearheaded the bill. Why is this happening? Many police departments in Delaware already use body cameras, but the latest statewide mandate comes after widespread calls for increased police accountability and transparency following the death of George Floyd, who died after former Minneapolis police officer Derek Chauvin knelt on Floyd’s neck for nearly nine minutes.

Officials promised to put body cameras on all police in June 2020 shortly after peaceful protests turned violent in Wilmington and Dover in response to Floyd’s death. Lawmakers, who work from January to the end of June, passed the bill last month.

It’s expected to take a few more years before the program is fully rolled out. In January, Carney asked lawmakers to fund the program as part of his spending plan. Under his proposal, the program would not be fully funded until 2025. Lawmakers ended up budgeting more money than he asked for, meaning that the program could be completed ahead of schedule, according to Department of Justice spokesperson Mat Marshal.

Lawmakers plan to spend $5.2 million next fiscal year on the body camera program. According to officials, the bulk of the expense will be for digital storage and review of the footage. The program will cost about $7 million per year for fiscal years 2023 and 2024, according to an official financial analysis of the bill. The analysis did not estimate how much it will cost beyond then.