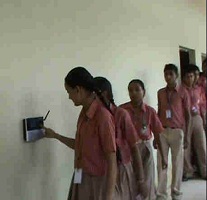 “We have decided to introduce biometric system for students followed by the directives issued from Directorate of Inspection of Private Schools,” said principal of private school requesting not to mention her name. All Sindh Private Schools Association (ASPSA)’s president Haider Ali said that private schools have to take security measures, but they are not allowed to charge any fees for security measures.

Confirming biometric system for students of private schools, Director General, Directorate of Inspection of Private Schools, Dr. Mansoob Hussain Siddiqui said that after the security concerns, all schools are notified to make their own arrangements for security including biometric system. “Followed by recent rumors about the kidnappings of minor children and students, we have conducted several meetings on the issue and have decided to take security measures,” Dr Siddiqi said. He said recently Directorate of Inspection of Private Schools issued a notification to the private schools requesting to increase security. Comprises on 16 points, the notification directed the schools management to ensure security. Record of all visitors should be maintained and kept, every employee should display his or her identity card visibly and strictly, hiring of general staff, watchmen to be done only after police verification of the individuals.

The schools have also been asked to display the Telephone numbers of CPLC, Police helpline, Rangers, Fire department on the notice board and to make sure that the administration knows the names and addresses of nearby hospitals in case of an emergency. All school administrations were also notified to keep complete information about the number of students and teachers as well as non-teaching staff to the relevant Police stations and to also install walkthrough gates, turnstile and bio-metric verification and CCTV cameras on school premises. Parking of vehicles around the school premises should not be allowed.