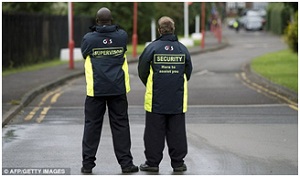 The latest edition of the Small Arms Survey puts the total trade in small weapons — like handguns — and light weapons — which include mortars, grenade launchers, recoilless rifles and portable missiles and rockets — as running at $7.1 billion a year. It also says the trade in light weapons, which account for $1.1 billion of the total, “is significantly less transparent than the trade in other weapons, including small arms,” saying only a fifth of it is officially recorded.

The documented 20 million security guards, representing an increase of between 200-300 per cent over the past two to three decades, form an industry whose rapid growth “has outpaced regulation and oversight mechanisms”, it said. Efforts at the international level to fill in regulatory gaps were at a very early stage, according to the Small Arms Survey, based on a review of 70 countries. The survey is produced annually by a team of experts based at Geneva University’s Graduate Institute of International and Development Studies and tracks trade in the weaponry and moves to control it.

In 2008, the last year for which figures could be compiled, the United States, as in previous years, was both the top importer and top exporter of small and light weapons, according to the survey.

As an exporter it was followed by Italy, Germany, Brazil and Switzerland, with Israel, Austria, South Korea, Belgium, Russia, Spain, Turkey, Norway and Canada also exporting this weaponry to a value of over $100 million a year each. Behind the United States as importers at over $100 million annually were Canada, Britain, Germany, Australia, France and Pakistan, said the survey, which did not give a breakdown of each country’s imports and exports. Despite evidence that some private security companies have engaged in the illegal acquisition of firearms, have lost weapons through theft, or have misused their arsenals, there is no systematic reporting of such misconduct,” the report said.

Firms working in Iraq and Afghanistan had been equipped with fully automatic assault rifles, machine guns, sniper rifles and in some cases rocket-propelled grenade launchers, “raising questions about their stated defensive roles,” it declared. Overall, the private firms hold up to 3.7 million firearms worldwide, more if undeclared and illegally held weapons could be included, against 26 million held by police and 200 million by armed forces, according to the survey. Outside of armed conflict settings, it said, private security companies in Latin America had the biggest arsenals with ratios of weapons per employee about 10 times higher than those for their counterparts in Europe.