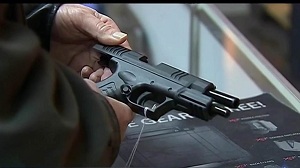 The Transportation Security Administration is seeing an alarming increase in guns seized at airport security checkpoints. Passengers are packing heat in the wrong suitcase. Last year the the TSA found 24 guns in carry on bags at Palm Beach International Airport. This year agents have already intercepted 15 and 13 of those were loaded. It’s the last thing any passenger would want to think about. “I usually don’t think about people traveling with guns,” said passenger Cierra Bharath in town from Toronto. But according to TSA, it’s happening more and more around you at the security checkpoint.

“Unfortunately, there is a trend upwards in the number of passengers that are bringing firearms to the checkpoint,” said Sari Koshetz, TSA spokesperson. The thought of loaded guns in carry on bags being thrown on the X-ray belt at checkpoint is chilling to Janna Tonahill who flies once a week. “It’s absolutely scary that it can go off at any time on the wrong move,” said Tonahill.

Fort Lauderdale-Hollywood International Airport is seeing a serious increase in guns brought to the checkpoint. According to the TSA, 56 guns were found in carry on bags at the airport checkpoint last year, this year the number is 47 and 43 of those guns were loaded. This is the airport where gunman Esteban Santiago killed 5 people and injured others in a shooting earlier this year. He brought the gun aboard legally. The law says you can travel with your gun as checked baggage only. It has to be unloaded and locked in a hard-sided container and the airline has to be notified on arrival. A passenger cannot bring a gun into a plane whether on them or in a carry on. “We want to avoid another tragedy and you’ve seen the way people sometimes sling their carry on bags onto the X-ray belt in the checkpoint. We don’t want an accidental discharge and then someone gets critically injured,” said Koshetz.