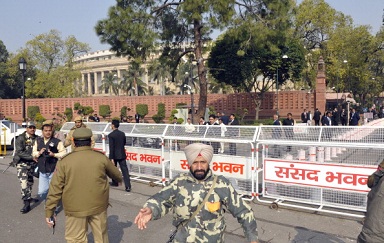 In a major security lapse at one of the country’s important buildings, the Parliament Security Ad hoc Committee has red flagged several security concerns. According to the committee’s report many CCTV cameras are not working while 12 gates in the high-security complex don’t have proper screening. The report says that there are no bullet proof jackets for Central Industrial Security Force (CISF) soldiers who are tasked with guarding the complex. The report has already been submitted to Lok Sabha Speaker Sumitra Mahajan and the Ministry of Home Affairs. The committee consisted of former home secretary RK Singh and former Mumbai Police commissioner Satpal Singh.

The report came after consultations with CISF, Delhi Police and intelligence agencies.
However, MoS for Parliamentary Affairs Rajiv Pratap Rudy said, “Security of Parliament is perfect. Security officers had sacrificed to ensure safety of MPs. We are aware of the need for strengthening security apparatus.” The report assumed significance as terrorists have attacked Parliament complex once. On December 13, 2001, five heavily-armed gunmen stormed the Parliament complex and opened indiscriminate fire, killing nine persons.