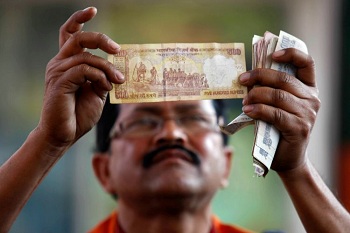 To check the menace of fake Indian currency, new notes, especially the Rs.1,000 and Rs.500 denominations, will have 7 new security features and a new numbering system, official sources have said. The currency printers hope to introduce the features on high denomination notes by May next year, and then extend the same to currencies of all other denominations.
The Reserve Bank of India subsidiary Bhartiya Note Mudran Pvt Ltd (BRBNMPL) and the state-run Security Printing and Minting Corp are both working to introduce the revised number pattern in currency notes.

The RBI has also asked the banks to stamp notes detected as fake as “Counterfeit Note” and impound them, while banks found not following the procedure will be penalised, the source added. The National Investigation Agency (NIA) has been designated the nodal agency for fake currency cases. The source pointed out that the fake notes inflow is no longer limited to smuggling across India’s land borders and Southeast Asian and Gulf countries are developing as important transit points.

Malaysia, Thailand and Oman have emerged as the new centres for stocking fake Indian currency for onward circulation across India. As per latest data released by the National Crime Records Bureau (NCRB), Gujarat tops the list of five Indian states that are considered the “safest” for circulating counterfeit currency notes allegedly pushed in by Pakistan’s Inter-Services Intelligence (ISI) agency. The officers said that they have been noticing for the past few months that differences between genuine and counterfeit notes were reducing and that around five such differences have actually disappeared.