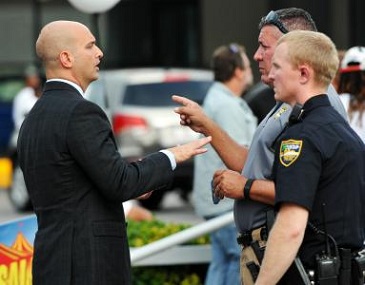 Safety drills, parent notification systems, and other safety measures in U.S. public schools grew in popularity in the years surrounding the massacre at Connecticut’s Sandy Hook Elementary School. A government survey shows the uptick came during a four-year span that saw an overall decrease in violent crime reported by schools, but one that included high-profile incidents such as the Newtown, Connecticut, shootings in December 2012 that left 20 children and six educators dead.
The findings, from the 2013-14 school year, come from the National Center for Education Statistics.

The survey found that 88 percent of public schools had a written plan of how to respond to an active shooter, and that 7 out of 10 had drills to practice the plan. About three-quarters of schools reported using security cameras, and 43 percent said they used security personnel at least once a week. Jo Ann Bartoletti, the Executive Director for the National Association of Secondary School Principals, said it’s encouraging to see school safety moving in a positive direction. She said one aspect the survey fails to measure is the efforts schools have undertaken to create a more nurturing environment.

“As the Secret Service, the FBI, and numerous researchers have confirmed over the years, the most effective way to prevent acts of violence in schools is to build trusting relationships with students and others in the community, so threats come to light quickly — and more important, so threats are deterred,” Bartoletti said in a statement.

Jayne Ellspermann, Principal of the 2,600-student West Port High School in Ocala, Florida, said she thinks security cameras and safety drills are important, but a big piece of the puzzle is working with students so they understand they can go to educators for help and making sure all students know it’s their responsibility to help keep their school safe.