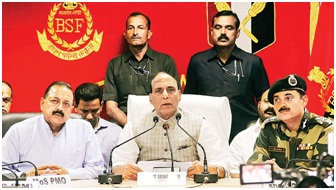 India’s border security has received a major shot in the arm, with a state-of-the-art invisible electronic barrier system coming up on land, water, air and underground borders using infrared and a laser alarm wall on the International Border (IB). Based on Israel’s border security measures, the two pilot projects are part of the 5.5-kilometre-long Comprehensive Integrated Border Management System (CIBMS), inaugurated by Home Minister Rajnath Singh in Jammu.

CIBMS is a foolproof surveillance system comprising thermal imagery, Infrared and laser alarms to form an invisible wall on India’s borders. Aerostars would also be deployed for aerial surveillance, while ground sensors are discreetly installed to check for infiltrators. A sonar system is deployed to secure unmanned rivers and nallahs.

The equipment will all work in tandem and transmit data to the control room, which will then alert the troops on the ground in case any untoward activity is detected. “I saw this technology when I visited Israel. Upon returning, we discussed it and started work on it. Our aim is to make our border security foolproof. These two pilot projects under CIBMS will go a long way in strengthening border security infrastructure,” Rajnath said.

The CIBMS will initially be used to cover gaps in the physical border fencing. Subsequently, it will be implemented on the whole border. “CIBMS will help reduce number of casualties suffered by the security forces, and also reduce stress levels,” he said. In addition to this, another 60-kilometre pilot project will be launched in Assam in November. In all, approximately 2,026 kilometres of vulnerable border areas will be covered. “We are working at upgrading all border infrastructure. More than 600 kilometres of roads have been constructed. And hundreds of border outposts are ready. We have identified vulnerable areas and gaps on all borders,” he said.