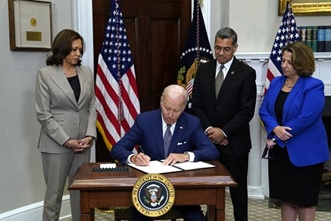 US President Joe Biden has signed into law the Prison Camera Reform Act, 2021, which requires the Federal Bureau of Prisons (BOP) to revamp the outdated security systems at its 122 facilities. It puts special emphasis on fixing broken surveillance cameras after the surfacing of several reports of inmate escapes, staff sexual misconduct and high-profile deaths.

The bipartisan Act came up after Senator Jon Ossoff’s Permanent Subcommittee on Investigations (PSI) released the findings of its investigation conducted over 8 months. The thrust of this exercise was to inquire into conditions of incarcerated individuals, especially women in relation to vulnerability to sexual abuse.

Ossoff succinctly encapsulated the same in his opening statement while presenting the results before Homeland Security and Governmental Affairs Committee: Our findings are deeply disturbing and demonstrate, in my view, that the BOP is failing systemically to prevent, detect, and address sexual abuse of prisoners by its own employees.

The Subcommittee has found that Bureau of Prisons’ employees sexually abused female prisoners in at least two-thirds of Federal prisons that have held women over the past decade.

We found that BOP has failed to prevent, detect, and stop recurring sexual abuse, including by senior prison officials. Consequently, it was found that BOP employees assaulted them in areas which lacked proper surveillance coverage. This finds basis in the testimonies of sexual abuse survivors in Federal prisons.

Various government officials have voiced support for and lauded the enactment of the said bill. Shane Fausey, President of Council of Prison Locals, said, “The National Prison Council applauds the passage of the Prison Camera Reform Act. This vital piece of legislation will require essential upgrades to technology and emergency communication systems, further enhancing the level of safety in our nation’s federal prisons.”