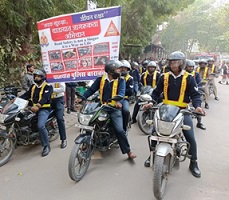 In a bid to reinforce crucial traffic protocols through stringent enforcement of rules and to raise awareness regarding road safety, the Uttar Pradesh Transport Department is now conducting a statewide road safety campaign.

The ‘Road Safety Month’ campaign which was flagged off on Jan 5, 2023, will continue till February 4. Under this, several government-run initiatives and awareness drives will also be conducted.

The state transport department is regulating several other measures pertaining to traffic and road safety awareness, some of which include:

• In the initial stage, the department has decided to raise awareness from the basic level. For this, road safety rules and measures will be incorporated in the school curriculum and multiple events will be organised in the institutions from time to time.
• The education department has also been instructed to design road safety-related murals on the walls of school premises.
• PWD has a role in improving the road design wherever required, putting up signboards and signals and working on accident-prone spots to make it safe for road users.
• The signboards should carry the phone numbers of transport officials along with the police so that they can be informed about any accidents.
• The department has further directed the vehicle dealers of the state to set up road safety corners in their showrooms.
• The transport department has also deployed a fleet of 19 LED screen-equipped mobile vans which will work towards raising awareness for road safety.
• Hoardings with road safety rules will be installed near prominent bus depots and government offices of the state.

Statistics have shown that an average of 22,000 deaths have taken place since the last year, due to road accidents. Overspeeding and negligence of road safety rules are the biggest contributing factors to road deaths in the state. It is further evident that those who are dying due to accidents are majorly from the 18-25 age group, followed by those in the age group of 25-35 years. The campaign is being run in the UP districts to reduce the number of deaths and road accidents in the state by 50%.