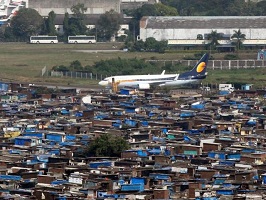 The Slum Rehabilitation Authority (SRA) and the Housing Department of Maharashtra failed to shift slum-dwellers from the airport land even ten years after a private builder was given the job of building alternative tenements for them, the CAG has said.

Slums still occupy the airport land, “which continues to pose a grave security threat”, the Comptroller and Auditor General said in its report, tabled before the Maharashtra legislature. The Mumbai International Airport Ltd (MIAL) had entrusted the task of rehabilitation of some 80,000 families living on airport land to Housing Development and Infrastructure Ltd (HDIL) in 2007. “Though (some of) the tenements were ready for rehabilitation, SRA had not taken the possession of these tenements from the builder due to non-finalisation of the list of eligible slum dwellers,” said the report.

“No slum dwellers could be shifted from the airport land even ten years after the scheme was taken up, defeating the objective of clearance of slums from airport land which continue to pose a grave security threat to the safety, security and operations of the Mumbai airport,” it said. The Housing Department failed to coordinate with the SRA and the Mumbai Metropolitan Region Development Authority for a timely shifting of slum-dwellers, it said. In another case, the CAG said, SRA wrongly approved a scheme for rehabilitation of Project-Affected People in eastern Mumbai, ignoring objections of the Bhabha Atomic Research Centre (BARC) and granting an undue favour to a private developer.

The Bombay High Court, on October 14, 2009, had directed the government to remove the encroachments along the pipelines which supply water to Mumbai. The government decided to provide alternative tenements to 7,500 families who lived along the pipelines. “The SRA sanctioned a slum rehabilitation scheme on a private land owned by a developer in village Mahul for construction of 8,582 PAP tenements,” the CAG noted. “The Bhabha Atomic Research Centre objected to the scheme as it fell inside its buffer zone, and raised concerns of a potential threat to national security. Similar concerns were raised by Hindustan Petroleum since the tenements were adjacent to their Mumbai refinery,” the CAG said.