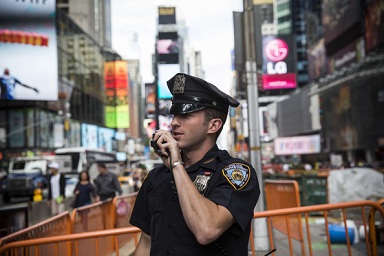 Malls across the United States are stepping up security following a terror group’s call for attacks on U.S. shopping centers — asking local cops to do extra patrols, inspecting deliveries and even monitoring social media chatter, a local mall operator and a top trade organization said. But a national security expert says malls are uniquely vulnerable targets that are hard to defend. “A food court is a target-rich environment, and it’s an attractive target because they’re not secure and there are a lot of people,” said John Pike of GlobalSecurity.org. “It’s an attractive target because you attack the entire American economy.”

Malachy Kavanagh of the International Council of Shopping Centers, which counts 68,000 members worldwide, said the video urging attacks on American malls from al-Shabaab, the Somali Islamic extremist group behind the 2013 attack on a Kenyan mall that killed 67 people, will prompt mall operators to add to measures in place since the Sept. 11, 2001, terrorist attacks.

Jennifer Kearney, the senior general manager of the Natick Mall, said in a statement they have a customized plan and most of the measures aren’t visible to the public.
“Our commitment to public safety also includes the need to assess all situations and make changes where we believe they are needed to enhance our public safety efforts,” Kearney said.

Most malls already have security camera systems in place. But they’ll also be screening delivery trucks, and some around the country are already deploying license plate recognition software that can spot stolen cars, Kavanagh said. Checking social media sites that could highlight a potential attack is another tool, he said.
“We haven’t gotten to a level of concern where you’re going to see bag searches. If (the threat level) were to increase or change, centers could up security measures,” Kavanagh said. “You have to take every threat seriously … the concern is an individual who can become radicalized or who is suffering from some mental deficiencies takes up the cause — the lone wolf, so to speak.”