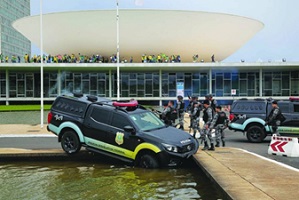 Police in Brazil plan on using facial recognition to identify protesters who rampaged through government buildings, escalating state surveillance in a move that has alarmed privacy and human rights experts.
Thousands of protesters vandalised Brazil’s Supreme Court, Congress and presidential offices in Brasilia last Sunday, seeking to oust leftist President Luiz Inacio Lula da Silva, who narrowly defeated incumbent Jair Bolsonaro in October’s vote. Police have arrested about 1,000 people, and said they would use biometrics “to identify those responsible for acts of vandalism”.

Facial recognition operates in 21 of Brazil’s 27 states, be it for monitoring urban transport or tracking school attendance. Rights groups say their rollout was opaque, with no public consultations or clarity on how the data is used and protected. While authorities justify the surveillance on security grounds, technology experts worry about privacy violations and the potential for profiling and discrimination, particularly of Black and indigenous people. Since 2019, 90% of people arrested using facial recognition in Brazil were Black, according to Panoptico, a project that monitors facial recognition use in Brazil.

“As a tool of mass surveillance, facial recognition is an expedited patchwork solution that demonstrably fails time and time again at meeting the security objectives it purports to enable,” said Matt Mahmoudi, a researcher at Amnesty Tech, an arm of Amnesty International that counters digital repression.

“It also erodes fundamental rights. Historically, marginalised communities are at particular risk; as is the privacy of Brazilians at large,” he added. For residents in Rio de Janeiro’s Jacarezinho favela, facial recognition could soon be an everyday hazard.

Already, Jamila worries whenever her 23-year-old son steps out of their modest home, fearing he may be stopped by the police — or encounter something worse. Her sprawling shantytown in Rio de Janeiro’s north, home to about 60,000 mostly Black and poor residents, has endured decades of violence between criminal gangs and the police.
Last year, authorities said they would install nearly two dozen surveillance cameras in the favela, exacerbating Jamila’s fears for her son.